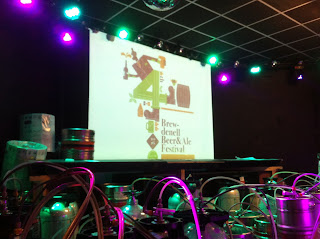 What a great way to stick two up to the new ridiculous alcohol guide line bollocks than with a cracker of a beer festival in January!

Yes this weekend saw the fourth annual Leeds based beer festival at the Brudenell Social Club - Brewdenell! Fourth time held and fourth time visited for this ghost.. and once again it didn't disappoint. The whole venue was rammed full of people, more so than last year I'd say, but this was no bad thing.. I got there slightly later than my Beer Ritz colleagues but we soon found a nice spot just by the keg bar (under a well placed fan) and tucked into a lot more beers.

My tipple of choice for the night was the strong IPAs from places I've never heard of, and places I can't remember! I do however recall trying some Edge Juggernaut DIPA and thinking it tasted far too much like hop oil. I then followed that with some Odell Myrcenary and once again was throughly impressed at how good that beer is! 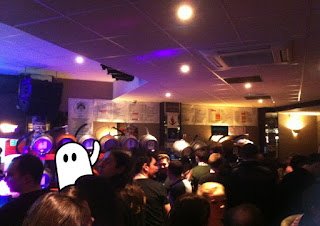 I sampled a few dark beers too, but nothing really stood out apart from some Founders Dark Penance and Kirkstall Barrel Aged Drop Hammer, which had a very good condition to it compared to the last time I tried it and it was completely lifeless..

That's something I did notice about this year compared to last, there wasn't that much beer on offer. Maybe it was just because I went late on Saturday night and a lot had run out, but the selection seemed pretty slim in my opinion. That's to be my only gripe, I had a good night indeed and look forward to the next! Still going strong at the fourth showing and continuing in popularity, it's definitely on the beer festival calendar of the not to miss category.

I was interested to hear that Friends Of Ham had a stall down this year, but was unable to sample any meaty goods as they'd gone by the time I'd arrived. Oh well.. It's not like the pub is far away!

January is an interesting time to have a beer festival if you ask me. I think it gets missed off a few people's Golden Pints beer festival of the year as they might have forgotten about it by December. Only a minor point, it takes nothing away from a great festival.
Posted by Ghost Drinker at 13:07