Considering the first beer I ever had from Firestone Walker was Parabola, it's safe to say I was immediately more than impressed with the brewery. That being said, when Brewdog Leeds got their hands on a fair few different bottles of the Firestone range it didn't take me long to get on the bus to town centre!

Now a few of the bombers took my attention more than others, and below are my thoughts of what I consider to be the more interesting finds.. (these were not all consumed on the same night! this would be very foolish..) 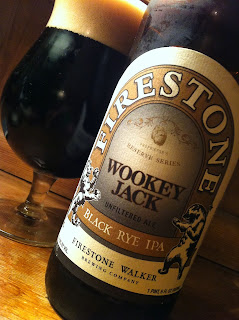 First up was:
Wookey Jack - a 8.3% unfiltered Black Rye IPA.
On the darkest of pours this beer displays aromas of caramalized oranges, lots of brown sugar and the hefty (and obvious) amounts of spicy rye. There's also some lemon sherbet kicking about with watermelon, peaches and apricots. It's pretty much exactly what you want a Black IPA to smell like, and more!
Initially you get a lot of burnt wood on the first gulp but this is very quickly replaced by a huge tropical fruit flavour. After you're done dancing the hula pineapple fruit salad dance the spicy rye creeps in delivering a very dry finish. The whole beer is wrapped up in a bone dry bitterness which leaves a sharp tang on the roof of the mouth. It's this and so many more factors that make you want to drink more and more and more of this beer. The alcohol is completely masked too which makes this beer all the more dangerous! What a way to start things off! firmly into the top three best BIPAs of all time (that I've tried..) 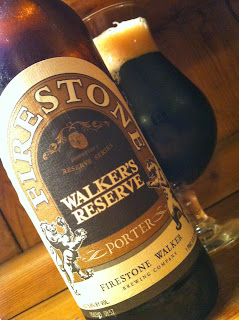 Second up was:
Walker's Reserve - a 5.8% straight up Porter.
It's a beer which pours dark, but not pitch black. The aroma here is all about the dark roasted malts - you know, big time on the roasty toasty flavours you love in a great Porter - Dark Malts all the way! Lots of chocolate, some coffee and plenty of brown sugar (again) with burnt caramel smeared on toast.
On the initial gulp the immidiate thought that crossed my mind was that this was a very, very dangerous beer. The one reason for this is because it drinks SO much quicker and SO much easier than a beer that's almost 6% should! There's a lot of brown toffee initially in the flavour. Burnt woody malts play around with dry and roasted bitterness in another beer that screams "You've just swallowed, it's time for more!!" The body of the beer itself is quite light and thin, which adds to it's accessibility in my opinion. Porter? Very much so! And a little more English in representation of the style than some might think... 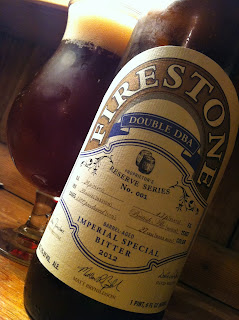 Last up is:
Double DBA - Imperial Special Bitter 12%
When I opened this it smelled like I was opening a bottle of whisky. The Bourbon on the nose is pretty damn extreme. Huge on the vanilla and solid lumps of hard fine brown sugars. The levels of banoffee pie is pretty starward too - SO much caramel!
The initial sip was a introduction to what is a very thick and rich beer. There is a lot, no, loads of Bourbon here, perhaps too much - it really does dominate the flavour. The ridiculous amount of bitterness that is still present in the beer still baffles me and the prickly heat of alcohol in the finish will always be a statement of the power this beer possesses. The thing that really took me was what happened to the beer as it warmed up though. Normally I'm not a fan of beers barrel aged which present too much Bourbon - I'm not a fan probably because I much prefer Scotch to Bourbon. But as this beer warmed I wasn't too bothered about the huge amount Bourbon, I began to enjoy it... It felt like I was drinking a very fine example of the stuff, and not just any old barrel they could get their hands on. This is where this beer wins. It has a LOT of Bourbon, but this time I can respect it's presence.

Once again, I'm left unable to find a beer from Firestone Walker that I don't find so interesting it captures my beery imagination, or is so good it puts other beers to shame!

Posted by Ghost Drinker at 14:36 No comments: 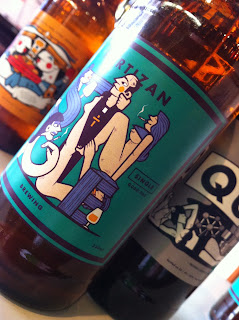 Where do you draw the line these days..?

A few bottles we've recently received at the shop have caused a little debate between myself and others at the shop recently. I guess it focuses on my question of; When is nudity, be it semi or full on, male or female, become appropriate to sell your product?

If you're reading this blog then you'll have no doubt heard of Pump Clip Parade.. a blog and twitter account which has set out to name and shame brewers who use scantily clad women and bad puns on their beer labels or pump clips to sell their beer. I have nothing against this movement, and I think it's something that needs to stay around. Take a look at some of the new Partizan labels though, and on a few of them you'll end up finding a bit of flesh here and there (as in the image pictured).. some a bit more full on than others.

The statement could be made here that Partizan labels are all art pieces, and should be free to display what they want. I could probably argue about the merits of art for purpose, vs art for publicity vs art in the wrong place endlessly here, but I won't. The cold hard fact is that Partizan sell beer, of which some have semi naked ladies on the labels. Art piece or not, do you think that is ok for your beverage?

Yes, yes. I know that the beer industry has come a LONG way from this... 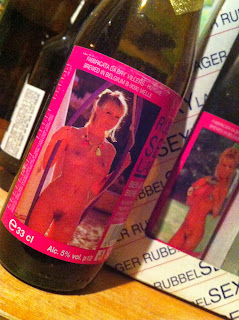 ...but when it comes down to it, Partizan are producing beers with labels that show women's breasts on the labels, be it art or not. I'm really not trying to pick on Partizan here.. I really do enjoy their beers, and think the branding on a whole is fantastically produced. It does make me wonder what would happen if another brewery came up with a label with a bit of a nip-slip in the design? If it was not seen as "craft" as others, would it get away with it? And where can the line be drawn? If we say these label images are fine because they're art, where might it stop? Might we see genitals appearing soon? True, alcohol is a adult product, but as clued up consumers are we still under the archaic notion that sex still sells? 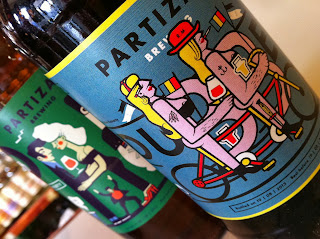 We like to look at the world as a place that's black and white when it comes to what is appropriate, right or wrong and acceptable, but the truth is we live in a world of grey.

One man's pornography may be another man's modern art masterpiece. There is still the massive argument of wether 'artwork' like this is suitable for products for mass consumption, but that's another essay altogether.. Maybe I'm making mountains out of mole hills here, but what I see are beer labels with semi naked women on them, and no one seems to be batting an eyelid...

I guess it's up to what you think.. unless the Portman group get involved unfortunately..

Once again, I have nothing against Partizan.. I truly do enjoy their beers and wish them nothing but the best, but I think this topic should be debated..

Belgian Red Sours/Flanders Oud Bruins are a complex variety. They come in many different shapes, form and even degrees of 'red-ness', but no one can disagree with their pedigree when it comes to a great beer style.

Martin Ridge (@6townsmart) has sent me a few different Red ales recently and it's been really interesting to see different breweries examples. I often find it difficult to precisely describe the Sour Reds as a whole... my tasting notes don't usually get past "very sour and fruity" so I thought I'd try review a couple of the more interesting examples Martin gave me here.. 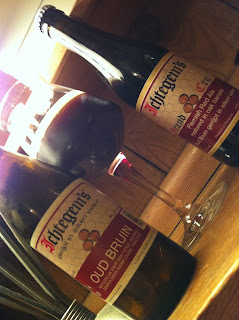 These two come from Strubbe brewery. Ichtegem's Oud Bruin was to come before the Grand Cru being a lighter 5.5%. Well the nose is certainly sour and fruity! There is also a lot of earthy, musty flavours too. Dates and figs mix with a slight pine nut and woody note. You get the sense there's a lot of amber malt to be had here and the flavour seems to back that up too. Lots of refreshing fruits in the main body; dark and red cherries, raisins, black currents all lay on top of a finish that's not very sour but still complex and delicious.

Like the difference between Rodenbach and Rodenbach Grand Cru, the Ichtegem Grand Cru is a very different animal. Coming in only 1% higher at 6.5% the difference in complexity is rather large. The aroma is similar to the last but more amped up on the earthy, nutty character. There's also a little sulphur amongst the oak and a slight vegetal overtone. The level of sour-ness is pretty perfect in this one. In comparison to Rodey Grand Cru, it's quite restrained which lends to it's favour as you're more likely to be welcoming to the style as it's not so in your face. Sweet caramels and ripe cherry sugars make it a very drinkable beer, and that's all need be said really - this is a really drinkable beer.