We've just had a delivery of some Tiny Rebel beers to Beer Ritz. It's something that's made quite a few people exited, including myself, for a couple of reasons which shall be listed. I've never tried any of their wares so I thought it would be good to get my impressions down... after all it's good to have more Welsh beers in the shop apart from just Felinfoel Double Dragon - it's not really a cross section of all Wales has to offer... 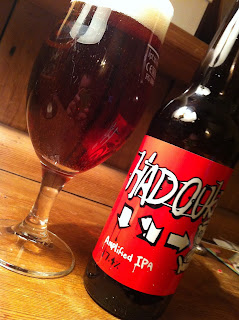 Hadouken - Amplified IPA - 7.4%
Who's not heard of Street Fighter? If you haven't then I feel sorry for you... Especially for those of you who think Ken is just Barbie's boyfriend. Hadouken is probably one of the best beer names I've ever seen, and it even leaves things open for more beer names, like Shoryuken or Tatsumaki Senpukyaka, it even has the button combo on the label!! It's not really a "finishing move" as the bottle sates mind, just a special move... Shoryureppa or the dreaded Shinryuken and Guren Senpukyaku - now they're finishing moves... but I'm getting far too geeky here...

It's a beer labeled to have a 'combo' of three American varietal hops and it has a clean and juicy aroma. Lots of lemon and lime mixed with caramel sweetness. It's quite a sweet beer, but it's completely different to any IPA (Welsh or otherwise) I've tried before. Once you get past the big initial bitterness and juicy fruity hops it moves into a grainy sort of malty backbone which is a bit rough but perfectly delicious. It's a little earthy and very drinkable for it's strength... grapes, melon, it's very fruity... all covered in amber caramel! The bottle kind of tastes like it's just come off the bottling line too - bonus combo! Delicious 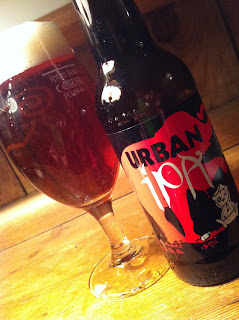 Urban IPA - 5.5%
A beer claiming to be intercontinental, it definitely looks like a beer you could have a few of and not get too drunk. This 5.5% IPA has a really juicy aroma about it, a little similar to the last too - I always like a bit of consistency through a breweries beers. If I'm going to be honest, this is an IPA that I could drink all day long. It's so easy drinking, so accessible, so light and refreshing it could easily turn the biggest beer novice onto something better. I'm really finding it difficult to describe this beer other than the fact it has the perfect amount of flavour that's not going to be offensive or too bland at the same time. It's balance personified. Quite different and stunning too.

This part some people may have issue with...
I've likened Tiny Rebel to Brewdog in the past, and still today. Other people have agreed with me, but they don't really say it out loud. It's been said that Tiny are like Brewdog but not... The only thing I can take out of this these days is that Tiny Rebel have a similar ethos to Brewdog, which there's nothing wrong with, but they don't shove it down your throat, and the branding is much better in this ghost's opinion... maybe that's why there's a likeness but it's not acknowledged. Hmmm....

I recently did a little beer swap with the overly generous and always Belgian enthusiast: Martin Ridge (follow on twitter - @6TownsMart) so I thought it would be rude not to share my thoughts on his beers right here - so that's what I'm gonna do, cos beer swaps are great, and even better to write about. After all, It's what I enjoy writing about. The beers come from Belgium and I know absolutely nothing about them to be honest, other than they look pretty darn tasty, so let's dive in! 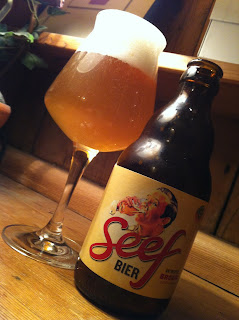 Seef Bier:
I won't pretend to know anything about this beer, I can't read the language on the label... maybe that's for the best, it's good to go into beers blind. It looks to be a 6.5% blonde from Antwerpse, with a surprisingly large sediment for what is apparently a supermarket beer (is that right Martin?)
It has a great aroma of lemon sherbet, coriander, orange peel and a floral softness which really lifts the brew. The flavour is quite sweet to begin with but then moves into a long lasting finish which is rather vegetal. Really fruity with predominant sharp tangerine flavours amongst lemon and a lot of lime, it almost has a Geueze like quality in the background, hashtag winning in my book! A little sour taste is complimented and balanced by a great fruity factor leading to a good bitter hop quality mixing in with the vegetal finish making it a real refresher! A little look up on RateBeer suggests that this is a revival of one of Antwerpen's best known historic styles by Johan Van Dyke. I'm not sure about all that, what I am sure about is that this is a great beer! 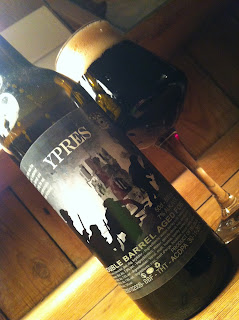 Ypres:
Apparently nicknamed 'wipers' by British troops in world war 1 because of hard pronunciation, Ypres was the centre of intense fighting between German and Allied forces (so says the bottle). De Struise have bottled this double barrel aged FOB (Flemish Oud Bruin) to a 7%, but coming from 2009 it could be a little stronger by now. This looks like a very special beer, but then again most do from De Struise as we hardly ever see them over here.
The aroma on this is huge. Loads of caramel soaked oak with hints of cinnamon, raisins, figs and very dry dates. The beer itself is aged for two years in Bourgogne and Wild Turkey barrels, I'm guessing it's a year each respectively. The flavour is absolutely massive! It's almost like a Duchesses on steroids... Sweet and sour, fruity and drying, it ticks so many bases. Sweet brown caramelized sugars, red wine soaked oak, sour apple and pear with some unripened plum skins, some balsamic vinegar, cherry skin coated in chocolate and almost a hint of herbs and lime within a malty backbone. It's such a complex beer it's almost too good. The texture and mouthfeel is so drying and moreish you can tell this has had a very long sleep on top of oak, I think it's this that really sets the brew apart from any FOB I've ever tried - a true step above the rest in my eyes.

I love bottle swapping.... Thanks Martin.
Posted by Ghost Drinker at 15:55 2 comments:

Cans From The Past 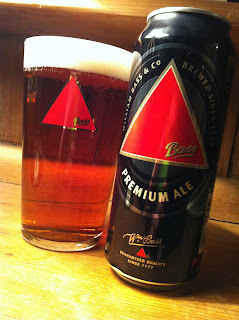 I've never tried a beer from Bass before. I'm not sure why because it has such a history behind it. The beer from Burton has a clearly recognizable design, the red triangle itself was the first the first trademark to be registered under the UK's Registration Trademark Act. That was in 1875/6, but the brewery itself has been operating for much longer, starting in 1777! Bass Pale Ale was once the highest selling beer in the UK so they say, so when I came upon some cans in Asda the other day I thought I'd give it a go... Cans would have to do, I've never seen a bottle of the stuff and certainly no draught.

It has an interesting aroma, lots of orange sherbet and waxy lemon rind. Some peach and apricot also comes out from the pristinely pin clear looking beverage. Coming from a can there is a slight metallic tinge to the taste, but it's not a terrible beer. It has a good biscuity malt body and clean bitter finish. It has a slight fruit and nut quality with hints of butterscotch, brown sugar and caramel. The finish has probably a bit too much sweetness about it and the body is rather thin but I don't mind it at all, it's a decent enough brew.

"Expect Perfection" the can states... I don't really have any major complaints...
Posted by Ghost Drinker at 13:02 9 comments: 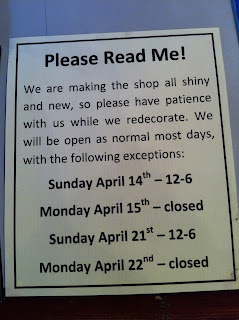 Beer Ritz is an old shop. The building itself is far far older and even a protected building so we can't stick any signs on the outer sandstone brickwork. Beer Ritz has been supplying beer to the good folks of Headingley (and the rest of the UK) for about 15 years or so now, and it's getting to the point where gaffer tape and will power can no longer really hold the shop together. Don't get me wrong, the tape holding the lights up in the fridges and the till printers which manage to explode on random occasions are just a couple of the excellent features that give Beer Ritz most of it's charm, but looking at it we decided it was time for a much needed face lift.

So, beginning this coming Sunday we will be giving the shop a bit of a transformation! Of course we will need to close for a couple of days while this is undertaken... We shall be closing early on Sunday the 14th at 6pm and all day Monday the 15th. The first half of the shop will be taken care of in this time and the rest of the week will be open as normal. The next Sunday and Monday (21st & 22nd) will be focussed on the other half of the shop, and all things well and good we should have a shiny new shop from Tuesday the 23rd!

Now I've never been a fan of change, but the things we have planned are getting me rather exited... or could that be because I get to tear half of the shop apart before it gets rebuilt... hmmm
It's going to be a good experience, and one that will be for the better!

Watch this space!
Posted by Ghost Drinker at 12:15 No comments: