There's been some interesting goings on recently around one of our local pubs which seems to almost border on the Hot Fuzz-esk shenanigans. I feel the recent actions of the Far Headingley community can only be classified by the term "for the greater good."

We have a well know pub in Far Headingley - it's second on the 'Otley Run' and is called The Three Horseshoes. It's stood in it's location for many many years, probably about a thousand... (not actually sure, but it feels like a thousand years when some people talk about it!)

The pub recently changed hands and this was the scene I observed when coming back from the deli one afternoon;

Crap quality photo I know, but you might just be able to make out that the name changed to the Industrialist - a pub that was going to push "All day food, Live sports and Craft beer" once the referb was completed.

This obviously had mouths agape and tongues started wagging whilst fingers pointed and heads shook... you get the gist. I personally thought it was a bit silly, but held some silent optimism and waited for opening night.

Now I was too busy to pop in for a pint on opening night but assumed it went down well. About a week later me and some friends decided to go check it out only to find the doors locked and closed. Without seeing any explanation I didn't think much else of it until I saw this tweet from Greg Mulholland; 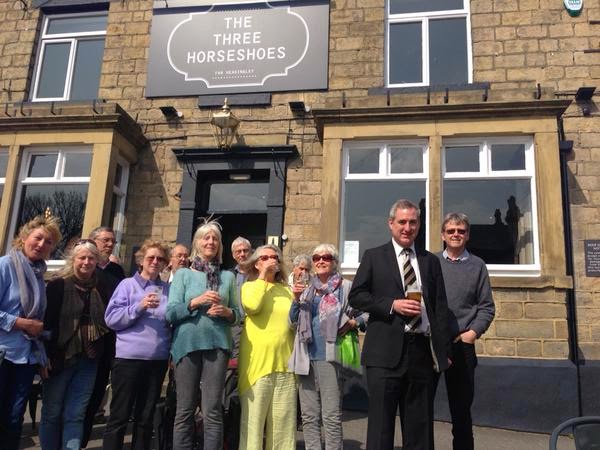 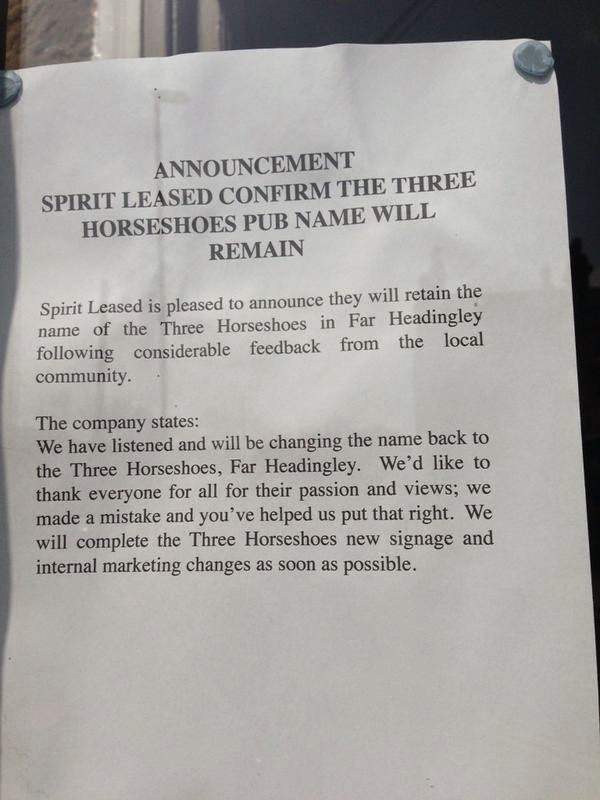 There it was, plain as day.. the name had changed back to The Three Horseshoes.

Now some of these women in the photo come in the shop from time to time and I see the rest of them out and about in Far Headingley a lot. I'm pretty confident when I say that I'm 99% sure that they do not drink in the shoes. I'm also pretty confident in saying that I'm 99% sure that these were the only people who will have complained about the name change.

I knew the Far Headingley community had a lot of power behind them, but for all of this to go down in the space of 2 maybe 3 weeks is very surprising to me.

All this pushed to one side for the moment though, name aside the referb is a vast improvement to the place. We went in for burgers and beers the other night and had to go back the very next day as the quality was that good. Call it what you want, surely it's the quality that matters the most?
Posted by Ghost Drinker at 13:42 1 comment:

I'm not sure I fully understand brewers need to put an 'Enjoy By' date on their beers instead of a best before date... What the hell (as a retailer) are we supposed to do with these beers if they pass this date? Treat them as out of date? Because they certainly seem to be without a BBD if they have an Enjoy By..

It seems to be a phrase creeping into a lot of pale ales and IPAs at the moment and its seeming to annoy me a little. Why not just use the phrase 'Drink Fresh' and stick to a best before date?

Maybe I'm making mountains out of mole hills, but as a retailer if you send me a pallet of beer with only three months to sell it, you're either totally convinced in your product to stand out against all competition - to sell out just like that, or oblivious to said competition at all!

Is an extra couple of months really going to make that much of a difference to the taste of your beer? If so maybe you need to think about making a beer that isn't so focused on just the hops. There's another three ingredients in beer too! We all know that hop deterioration does exist, but I've never been shown any sort of time scale for this phenomenon much less pair two of the same beers made one month apart...  I'd really be interested to know if someone had tried a beer that was five months old in the bottle compared to a beer that was one month in the bottle. Honestly tell me you'll be able to tell the difference, cos I bet you wouldn't be able to - unless your mind totally convinced you otherwise!

Forget the Enjoy By, forget even the Drink Fresh! Just stick to a best before date (which let's face it, unless you're making a wheat beer doesn't matter at all)

And how about you all stop making beer which you know will lose half it's flavour a couple of months after it's been produced... It's not a realistic time scale to sell your product!
Posted by Ghost Drinker at 15:17 4 comments: