When Did Beer Become A Fashion Accessory? 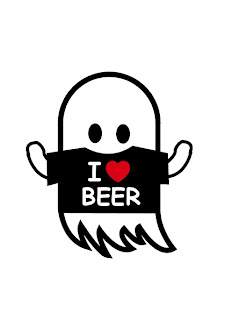 - Come up with a name for a brewery.

- Come up with names for all the beers you're going to make.

- Come up with all the beer styles you like the best and which you will obviously need to produce.

- Get a design student to create branding and a logo for your brewery which looks mega flash amazeballs.

- Get this logo and branding put on glass ware, and mock up some bottle designs.

- MAKE SURE YOU GET THIS BRANDING PUT ON A T-SHIRT.

- Purchase an old kit from a brewery you've never heard of.

- Find out what the new hop on the block is and if it's been used in a single hop beer yet.

- Find a distributor who will put your beer in bars and shops all over the country.

...and after all this has been done

- Make you're first ever beer.

- If it turns out wrong, call it craft and sell it anyway.


Is this really what brewing is becoming?
Posted by Ghost Drinker at 13:53 6 comments:

Insanity of Balance, Subtlety of Extremes

Why can't you ever have an extreme balance in beer...

It seems these days in the brewing world you have to go big or go home, and any brewery not making 'extreme' beers is boring... and certainly not 'craft'.

So what happened to the subtle beers? What happened to the balanced beer? Extreme beer certainly isn't anything new... people were actually drinking very strong stuff before I, or even you were born. Most of that stuff had crazy ingredients and was barrel aged too! (and pretty awful so I hear.. has much changed these days, honestly..?)

When was the last time you had a British pint of, say, 4% Pale ale or Bitter that was so balanced, so drinkable, with just the right amount of flavour that one pint turned into three before you knew what happened? Can you name five of these beers? I still see them around, and when they're good they're great! It seems in a lot of bars these days I'm more likely to find a big bruiser of an IPA or Imperial Stout pushing upwards of 8% rather than a 4% Pale ale. Maybe I'm just not looking hard enough anymore, I don't know...

This begs the question though, why do these stronger 'extreme' beers have to leave you feeling like you've been hoofed in the face by a donkey every time you take a mouthful? Why does every beer these days have to shock, be the biggest, be the strongest or hoppiest.. Why does beer have to have so much flavour it stops becoming enjoyable? Any brewer can put intensity into a beer, all you need do is whack in a boat load of ingredients and then stick it in a Chardonnay barrel or something. To make a strong or 'extreme' beer balanced, to make it subtle and drinkable whilst having all the noise behind it too - that takes skill. That's a true craft.

Over the past couple of days I've had a few 'crazy' beers when you look at them from the outside, but once those bottles were poured what I found was something much more; I found something extreme and something drinkable at the same time, something that was strong and powerful, but subtle at the same time so I didn't wince every time I took a mouthful.

A couple of those beers came from Magic Rock. 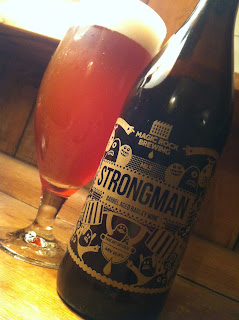 The first was the recently released Strongman: A 12% Barley Wine aged in Amontillado Sherry casks with more hops in it than you can shake a stick at. Sounds like a beer not to be trifled with on paper, but is it all that? When it came to the aroma of the beer I immediately thought of diacetyl, I was wrong in this though. What I thought to be a butterscotch aroma opened up into a very sweet caramel playing among a mass of earth-pine like smell. There was sweet summer fruits too, and these aromas continued to evolve as the beer warmed. It was evident from the first sip this beer was big, thick, sweet and rich. Lots of watermelon with sweet toffee. Pine needles and oranges soaked in a 30% desert wine (if such a thing exists) loads of earthy bitterness too which leads to a finish which belies it's true nature.

This is the point. This beer is 12%, it's barrel aged, it's pretty darn extreme... On the one hand it has a powerful presence, but on the other it's perfectly balanced. It's not in your face. It's not cringe making beer it's dangerously drinkable beer. Subtle flavours mixed with powerful design. Perfection. 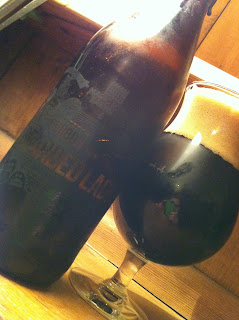 The second was another bomber of magic: A 10.5% Imperial Stout aged in a Bourbon barrel - BBA Bearded Lady. Once again, sounds like it'd be a bit too much for the average drinker... but it's not.

On first examination the beer presents itself with aromas of chocolate fudge brownies and vanilla. It's literally desert in a glass - almost like someone's taken a scoop of vanilla ice cream and poured a bit too much chocolate sauce on it. There's wood too and raisins. Lots of decadent dark cherries go well alongside just just a hint of spice - a fantastic aroma if there ever was one. The beer itself is almost stupidly drinkable. Magic Rock have really hit the nail on the head with this one. Once again, it's rich, it's devilish, it's full bodied and packed out with flavour - but it's amazingly and perfectly balanced, it's brilliantly drinkable and it makes me want more and not want to stop drinking.

This is how to really brew beer.

It's taken me a while to come to this conclusion, but I now feel that you can make any kind of beer you like. If it's not drinkable though, if it doesn't have balance, what's the point?
Posted by Ghost Drinker at 13:51 1 comment: