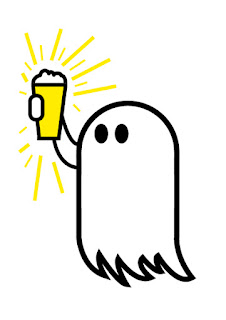 Well, it's been rather a while so I figured I'd leave it right to the last moment to rock out my Golden Pints...

Best UK Canned Beer: Brewdog Black Eyed King Imp. (If not for the ridiculous price tag, I would have drowned in the stuff!)

Best Collaboration Brew: Not hugely keen on colab brews, too much for the fan-boys in my opinion, but I'm currently drinking a Key Lime Tau from Crooked Stave and Hawkshead as I type this.. (it was a gift, I'm not a beer fan-boy)

Best Overall Beer: Talk about choosing your favourite child! Well if I did have any children, I'd have to choose To Ol Like Weisse Directors Cut Imperial Berliner Weisse - just purely for the shock factor of how damn good that beer was.

Best Branding: Tempest have done the magic for me this year. Great move to go into 33cl bottles, and they're flying out right now.

Best Pump Clip: I don't really pay attention to them, but I'd have to give my props to Northern Monk Brew Co for making possibly the biggest pump clips ever!

Best UK Brewery: It'll have to be Mad Hatter for me this year. Not only because their beers are very good, but also because of a few following things - They regularly email me stock lists and are very quick to reply to queries. They are very prompt in delivering beer, and never get it wrong. They are incredibly friendly. They also have great branding. Hard working guys if I ever saw.. If you want to sell beer in Beer Ritz take note.

Best Overseas Brewery: It's got to be Firestone Walker this year for the sheer quality of beer they produce.

Best New Brewery Opening This Year: I honestly don't know the dates that breweries open, but First Chop is new to us and does a storming range of very popular Gluten Free beers.

Pub/Bar Of The Year: In the last few months my regular haunt has shifted from Arcadia to East Of Arcadia so take from that what you will..

Best Festival Of The Year: Leeds International was solid as ever.

Supermarket Of The Year: Marks & Spencers for a great range.

Independent Retailer Of The Year: Have you heard of Beer Ritz?

Online Retailer Of The Year: HAVE YOU HEARD OF BEER RITZ??

Best Beer Blog/Website: Loving the balls-out approach thats been going on over at Zythophile this year.

Dumbass Decision Of The Year Award: Goes to Green King to limiting the import of Goose Island beers to IPA, Honkers and Urban Wheat.. WHERE'S THE BOURBON COUNTY?!?