A Night With A Rooster

Arcadia real ale and wine bar in Headingly hosted a Meet the Brewer night a couple of days ago with some of our local favourites - Rooster brothers Ol & Tom Fozard. Now I didn't exactly manage to get down for the talk they gave, which I heard was very well received, but I made sure I got down for all the beers they had put on show.

Buckeye 3.5%
The first one I opted for was the most obvious choice for a starter, but not a Roosters beer that I'm actually familiar with. Buckeye is a pale gold session Bitter with an inviting straw/grassy/citrusy aroma - think lemon and hay too. On initial sips (gulps) you notice a light bitterness among a very soft and floral body. It's not that light for the % though. The gentle malt backbone which is supported by new world hops gives a really nice body and mouthfeel. Finish it off with a classic Roosters bitter sweet finish and it's a real good refresher. A beer that can easily be supped in five minutes with you going back for another 3 or 4 without worrying about the next day. A great starter.

Fort Smith 5.0%
Next along the line of pumps was Fort Smith IPA, which is a little bit of something special! I've had this brew a few times before, but it's not a beer that I can see getting old anytime soon. It's only a shade darker than the Buckeye and the five big name hops used in the beer push the aroma in the general juicy hop direction. You can tell from the first sip how much flavour this beer really has - it's a hop bomb powerhouse, but at the same time still has that classic soft and floral Roosters quality. It's got some dry sherbet and tonnes of orange rind. It's really juicy, but very bitter too, a bit like a orange and grapefruit juice mix. It's a bit of a strange IPA but not in a bad way. It seems to be very new world-ish but at the same time you know you're drinking an English IPA.

Londinium 5.5%
For the last of what was on show, Londinium coffee Porter really finished things off nicely. It's a pitch black beer with sweet mocha aromas. On further analysis I get hints of chocolate and a little dusty dry oak. It's got a really nice thick rich malt body which gives a perfect mouthfeel. It's a beer packed out with flavour; lots of vanilla, roasted coffee beans and oaky/woody notes - I can agree with Tom when he says it makes a great nightcap.

Rooster Brewery seem to be going from strength to strength these days. I think their pump clips might even be winning me over when I can see them all side by side like they were. After hosting a homebrew competition they went on to produce the winning entry on their trial plant to be put in bottles. We got 12 of these bottles at Beer Ritz. They took about 2 hours to sell out.... I'm pretty confident that's the quickest we've ever sold a case of beer. They've also had what looks like great success in relaunching the Outlaw Brewing arm of the company, for more info on this pop over to Leigh's blog to get the downlow. I'm looking forward to seeing what they come out with next. 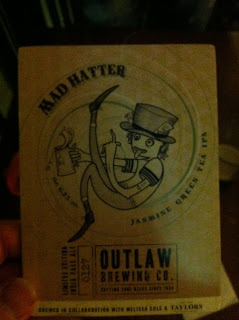 Posted by Ghost Drinker at 09:46 No comments: