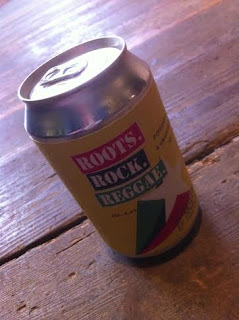 Maybe I've not been looking hard enough but it feels for me like the 'hype' or excitement about new release beer cans has just dropped off a little as of late. I'm going to rectify that now by telling you about one of the best beer cans I've had in a very long time!

The experimental Outlaw arm of Rooster's Brew Co have just released their first can, and what a thing of beauty it is! Roots. Rock. Reggae.  is a pineapple and grapefruit IPA, and we're not just talking about flavours here. They shoved so much pineapple and grapefruit zest and juice into this beer it hardly even tastes like a beer to me, more something like Lilt or tropical fruit juice. Perfect balance and not too sickly. I could drink this all day, which is a dangerous thing at 6.4%

Now apparently this is a 'limited' release beer.. but I've heard that before and I don't pay too much credence to that statement these days, but if you do see this beer, BUY THIS BEER!

As a side note, me and a colleague were talking about this beer at the shop and he reckoned that the beer would sell better under simple, solid Roosters packaging, instead of the Outlaw labelling. I have to agree a little bit, but I'm not 100% sure why.. Not letting that take anything away from this beer though!
Posted by Ghost Drinker at 09:22 No comments: