I've been thinking a lot recently about how people go about buying beer and the habits that can form among people in their shopping trips. Over the eight or so years I've been working at Beer Ritz there's one thing I can be sure of. People do not have the same tastes. Many factors lead to this of course. Some choose by preference of taste, some by style of beer, a few by allergy restrictions. Others buy by what they might think is a good beer and what isn't - by appearance of said product.

It's an untold truth that with, like most shoppers, some who come to ours will buy with their eyes rather than experience. This is fine at the end of the day.. it means the beers they choose have done a great job with their marketing to get you to buy.. but does that beer fit the customer's bill? Do you trust the name that much? Do you like they brewery that much to say they'd never make a bad beer?

Is there a reason why I bought a beer from a well know Huddersfield brewery when there was eight other different breweries on tap last week in the pub? Even when I hadn't had the beer in question before..? I didn't even think about it, I saw the badge and went straight for it... It does make me wonder why sometimes.

What would sell more? A big champers-style cork and caged 75cl bottle, wrapped in paper and put in a wooden box, or the very same beer sold in a milk carton...? What if the milk carton (of which the beer tasted the same) costed a full £10 cheaper?? Customer behavior can be a fascinating thing.. I've heard on more than one occasion when I've pointed out a good beer; "I'm not buying from them again.. I had a really bad one last week." People can be very loyal when it comes to beer, but there will always be people who can be extremely fickle.

If style and design are such a powerful force behind selling beer how come one of the "top ten beers in the world" has no label... just a brown bottle... or is that a design in itself??

This variation of consumerism is a good thing for us mind.. With such a verity of products we can always be sure that we'll have something for everyone.

One last thing to think about though. Say there was a brewery you knew... It's quite a famous one, you all know it. Say they were going to have a complete re-brand and shake up in the brewery.. They were going to increase production and start selling to supermarkets. Let's say they were going to add this and that to make it taste exactly the same from the new mega-brewery. Propose I bought an old and new version of the beer and yes, they were identical in every aspect... 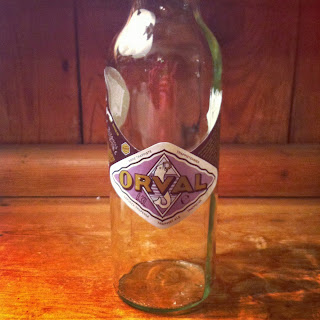 What now? Would you still be loyal?

Reading Curmudgeon's recent post and subsequent musings from Boak and Bailey on the similar theme about how the beerosphere has gone a little quite recently got me thinking about my own writing efforts.. I've not been posting as much recently, and that's got me feeling a little down. Time to rectify that though with a good old dose of ghosty ectoplasm and beery goodness! Blogging about beer isn't just something that happens on it's own, it's something you actually need to work at to keep going, and it's something that I really enjoy so it seems a shame to have it slacken.

I've been so busy recently that I also missed out on the fact that Ghost Drinker turned Three yrs old as a blog about a week ago!

I agree with the comments from Mudgie and B&B when they talk about the increased use of Twitter... but for me that disheartens me slightly as I feel the 140 character limit removes the most important aspect of the beer world - the personal aspect. The Beer Ritz Twitter account seems a bit faceless to me sometimes... I think that's why we started a instagram account (follow us at beerritzleeds) - I think it's going to be a great way for all the staff to individually (but collectively) post about what we are drinking and what's good at the moment. I think it has a chance to have a little more personal feel to it, we'll see how it goes.

Enough about that stuff though... I'm here for beer tonight, and it's been a good few weeks recently! The past few days have been made subsequently more enjoyable given the recent offerings that Brewdog Leeds procured. I won't start to guess how they got a supply (and such a large range at that) of Brasserie Dieu du Ciel from Quebec but I'm very happy that they did. Ever since my first encounter with the brewers' beers I've longed for more of the same! Even if it was a little bit of a strange first encounter...

While the Penombre Black IPA and Aphrodisiaque cocoa and vanilla Stout were brilliant offerings, I'm choosing this one to write about tonight: 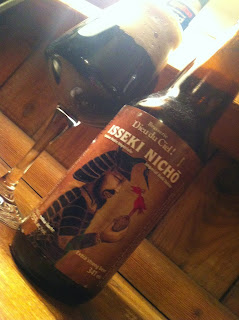 Honestly a style of beer I can say I'd ever even think of!

The aroma is quite stunning. Think of a Saison/Imperial Stout blend and you're almost there. Burnt coffee and roasted pine nuts. Dark chocolate with some yeasty spice - black pepper upon dark cherries.

I thought the beer itself would have a huge Stout-like presence, but initially the beer presents itself as more of a very strong Belgian Quad. Lots of warming booze and dried fruits. It's only after the swallow that you get a huge roasted barley flavour and charcoal mix which brings it back to Stout. It's a hybrid of styles really, but it's not a mess, it's perfectly produced and very well thought out.

It's good to be writing again. It won't be long before I'm back behind the keyboard once more...