I got a bit of stick recently from more than a few people for stocking a new lager in the shop, and I think unfairly so.. I think this stick might come from quite a bit of beer snobbery, so I decided to do a bit of an experiment...

I've been craving lager recently, not sure why but I've been drinking quite a bit of it. The beer itself I recently started stocking is Primus - that (yes that) Belgian lager. I feel it was badly received in the shop, considering we also sell beers like Carling, Fosters and Corona ect.. Yes we actually do sell those kind of drinks! We are a local off-license as well as a specialist beer shop! 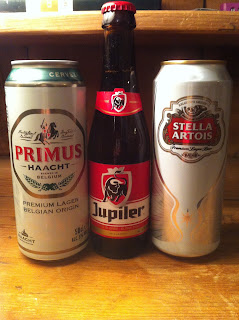 So I decided to grab a can of Primus and another two beers, we also sell, and see if I could pick out each one in a blind tasting. I made sure I was completely withdrawn from the pouring so as not to give any bias, and also made sure the name of each beer was stuck to the bottom of the glass for later.

They all tasted pretty much the same to me, if not for a slight discrepancy in texture, a slight colour difference in one and a bigger carbonation in another. 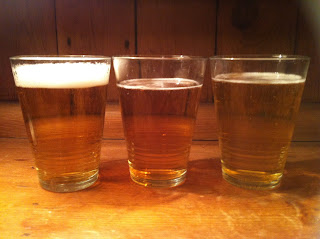 After peeling back the paper it turns out beer 1 was Stella, beer 2 was Jupiler and beer 3 was Primus. So a pretty interesting experiment if not for the only conclusion that these beers are all basically the same. Yes, all these beers taste the same. And I'm not just saying that, I know the differences in beer, even when it comes to the "same" beer, look here at when I did US Sam Adams vs Kent Sam Adams.

Don't go judging beers without trying them, and certainly don't go judging them because you think they're crap.. There's a beer for everyone. And I'm happy to report since stocking it last week, Primus (which I actually preferred, probably because of the extra carbonation) has easily out-sold Stella and Jupiler.