It's back to Roosters brewery this week for another interesting looking bottled beer. Roosters bottles are rarer than hen's teeth round here, and when they do show themselves on our shelves they don't roost for long! In fact the case of this beer we got into the shop sold out in a matter of hours... 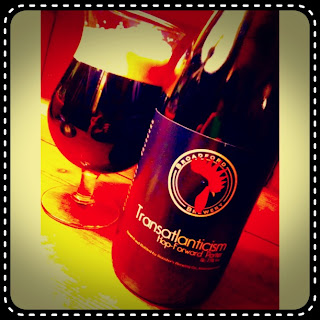 Transatlanticism is a hop forward Porter coming in at 7.3%. It was brewed in collaboration with David Bishop, who took part in the Rooster's home brew competition, with Transatlanticism being the winning entry.

The aroma is rich and roasted with hints of toasted oats and dry hay. There's also a lot of fruitiness about it too with orange marmalade notes and a little sherbet citrusy/spritsy quality. It looks fantastic in a cleanly polished glass, almost like a big round solid block of jet.

The first thing you notice about the flavour is the big roasted barley hit that rolls across your tongue. This mellows out leaving a gently bitter taste with dry coffee, some earthy essence and just the right amount of warming alcohol so you don't knock it back too quickly. If you look a little deeper you do get the big presence of the hop bruisers coming out, with big names like Cascade, Chinook and Simcoe adding to the dry fruity punch. More dry hopping on top of that with Cascade and Centennial only adds to the hop profile.

As I was drinking the beer I didn't really think that it was a hop forward Porter though... I didn't think it had enough body about it. On further evaluations though I realised I've never actually had a beer which has described itself as a 'hop forward Porter' so i've got nothing to judge it against in terms of style, so that argument is rather redundant. I guess the best thing to do was judge this as a very nice beer, and at the same time, something a little different from Roosters brewery.

It would be great to see a few more of their bottles on our shelves now...
Posted by Ghost Drinker at 14:55