I'll begin this post be stating this was the one and only beer I have been looking forward to the most this year. (ever since I learned about it 4 weeks ago that is!)

There are certain breweries out there, breweries that you know, breweries you trust. Breweries that make a core range of about 4/5 beers and never make anything else. Beers that you will see, and think I'll have a pint of that - it's safe. You know the breweries I'm talking about.

That's why when I heard about this beer I knew I had to get my lips on some! I mean, just look at it!! Introducing Black Sheep Imperial Russian. 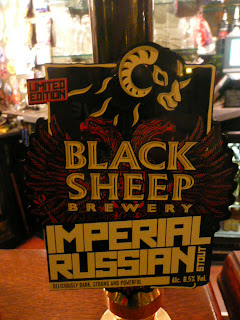 Correct me if I'm wrong but this limited edition Imperial Stout was created in a batch of about 50 casks mainly for a journey. Like Pete Brown and His IPA journey to India before it, a group of 12 breweries have all created a batch of imperial stouts for a sea voyage to Russia by yacht! If that doesn't wet your whistle enough, I've heard hear say that Black sheep are bottling a small amount of the beer, and we should be getting some for Beer Ritz :)

If you ask me, if you needed proof that the beer industry is alive, well, and doing amazing things at the moment then this is proof. Not just because another brewery has made another imperial stout, but because Black Sheep, with the fantastic history and legend for brewing that they have, have made a beer, a new beer.... which really is this good! 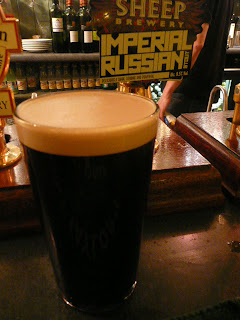 The beer is fantastic! Its a black hole looking beer with an aroma to match. Flavours run through the nose of big liquorice, tonnes of dried fruits e.g. raisins, with some big woody oaky tones coming through.

And what a flavour to taste! Initial impressions abound of burnt toffees, over-ripe bananas and a big roasted malt bitterness. It really is a beer that's too easy drinking for 8.5% You could have two pints of this before you knew why or what you'd just done. You get some hot alcohol, slight woody effect amongst a rich, smooth, silky, lactic/oatmeal body. There's a slight tartness coming through in the finish from the overflowing fruits. So much raisins! Hints of cherries and melon in there too. It's a fantastic beer.

So does this mean all the old school daddies of brewing are stepping into the fray and producing beers to match the nations lust for the most flavourful beers on the market? Yes or no? This brew would certainly would give most "Craft" imperial stouts a long run for their money!

For me this is a little bit of a statement to the beer scene: Long established breweries know how to brew beer, fact. They can and will brew beers that people will not only buy, but rave about! Lets hope this wave of new/experimental brews is not just a blip on the radar of a long story of some big name breweries. So raise your glasses! Here's to the noise makers, cheers.
Posted by Ghost Drinker at 15:43