So it turns out Brewdog have produced a 4-pack of beers. It's a 4-pack of the same 4, 7.5% IPA's, with one difference between them; the hops used in each. Yes each is either hopped with Nelson Sauvin, Sorachi Ace, Citra or Bramling X hops. There idea was to showcase 4 different hops and there merits in a sensible way.

They quote; "Can you say you've ever experienced 100% pure hop awesomeness?"

They also quote; "We felt it was time hops went solo and got their own prime-time show."

Quick, someone tell the 20% of breweries in the UK that have never done a single hop beer.

Maybe I'm being a little mean (if you read on you'll find I love em') My main gripe comes from the next quote they plaster all over there beers;

"At Brewdog we are insanely passionate about hats, rock 'n' roll penguins, avoiding ghosts and hops. We bloody love hops"

Seriously, what you got against ghosts?!? Are you scared of them? There's one right here writing about your beers, and I'm sure your familiar with the notion that even bad press is still good press.

Anyway down to the beers; 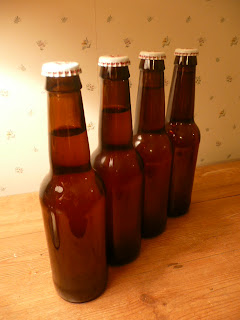 Don't colour me crazy just yet though, there is reason to my madness. Brewdog have said that they wanted to showcase the best that hops had to offer, and they've certainly gone for 4 greats. I do however think that if you know what your going to drink before you drink it, you'll build up expectations on what you think that beer will be like, and that will slightly mask what it's actually like and its merits. I have my own pre-conceptions of what all these hops are like and I didn't want that to interfere with my tasting experience. So I went in blind, completely unawares to what each beer would deliver - to fully appreciate what just a simple change of hops would deliver, and how it would affect a beer. (in truth though, these hops are all completely different, and I could pick out each without trial, which has it's good and bad points. It was still much better than knowing what I was drinking.)

This might make sense to some and not to others, but I really think not knowing what your drinking can really open your eyes fully to what your consuming in that specific time and place.

Let's get down to business. 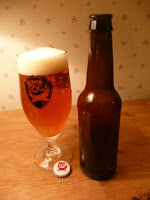 Beer numero uno; Aromas abound of lemons and grapefruits. There are small hints of caramel malts underlying, but it's mainly about the fruity hop. You get an immediate blast of big juicy flavours, which quickly subside to a nice bittering finish. The initial flavour drops away rather quickly, but the bitterness is well lasting throughout the finish. Flavours of grapes, lemons and limes, and a slight honeycomb sweetness amongst a big lychee hit. From the honeycomb comes some smooth caramel malt character. It's moorish and balanced, with the classic IPA orange rind pithy-ness which I'm fond of. 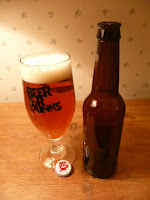 Beer number 2; Aromas; big on blackcurrents with a sort of un-ripe plum tartness going on in there, and some vegetal skin. It's a light beer but it's big in a bitter body. There's big citrus hints and flavours of tomato/plum skin tartness. Some blackberry jam and a sour tang in the background. Smooth in body and texture making it easy drinking. It's more of a fruity malt beer rather than a hoppy bitter beer, but hey, that can be the hops playing there part. 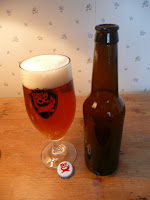 Beer number 3; Strange aromas of thai green lemon and lime rice. I never thought a beer could smell so like a curry before. There's a hint of spice (ginger?) hidden amongst some fruity character. It's rather floral on the first sip. It sounds strange, but I'm thinking thai green chicken again! It's very dry, there's lemon grass flavours all around, and a nice 'grainy' texture which lends itself well to  the bitterness. There is a warming effect in the throat, but most of these do at 7.5%! A very bizzar beer, not something i've had before. 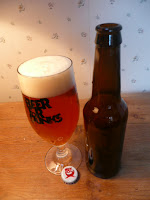 Last beer, number 4; The aroma to this beer is pure lemon sherbet, I can't quite get anything else, it dominates. The beer is balanced but the flavour is not overpowering. It's kind of, your regular big IPA, hints of citrus with some usual background caramel malts leading to a smooth body quality. The flavour, again, drops away quite quickly making it very moorish and refreshing. Not the worst of the bunch, I couldn't pick one out, but not my favourite.


After all that, I certainly feel refreshed. 4 great beers, strangely familiar, but completely different at the same time. (I suppose that's what they were trying for. Pulled it off like they always do.) More modern classics coming from the kennel then, I suppose. I would recommend the 4-pack to anyone in Beer Ritz, whilst it's not a new idea, it's definitely an interesting one. I have some AB:05 sitting in my room right now, might be interesting to see what "Brewdog's best beer" has to offer, as they put it! Might even write about it if they let up on my ghostly brethren.