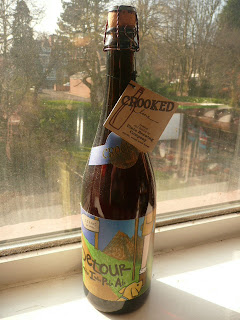 Looks nice Doesn't it? Yes it does. That's because the label was designed by an artist.
Detour double IPA is part of the Crooked Line series of beers from Uinta Brewery (earth, wind and beer apparently) The series consists of 4 beers; Detour - a 9.5% double IPA, Cockeyed Cooper - a 11.1% bourbon barrel aged barley wine, Tilted smile - a 9% Imperial Pilsner and Labyrinth - a 13.2% black ale.
The interesting part about these beers (not that they don't already intrigue) is that the labels for each one are unique and were designed by 'local' artists. It began to dawn on me "why aren't more brewers taking advantage of there local artists/designers to create innovative and cool looking labels?" I know Brewdog are keen to use artists on some of there specials, and Magic Rock brewery sourced a great designer for there new range of beer, but it just seems like people aren't taking notice of local talents and using them. Who knows I could be wrong, but if they are it's not being promoted very well. 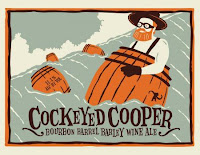 These are the 4 labels which were produced, and it's safe to say there all pretty awesome. I also wonder how expensive it was for the brewery to acquire these labels, I know I'd do some labels for free, or at least for a case of beer! That must be my Que. to plug some of my own artwork! hint hint.... The picture below was the last painting I produced a couple of months ago, and I know it doesn't have anything to do with beer, but bear with me. It's all about thinking outside of the box, it may not look like anything you'd see on a beer label, but it very easily could be! If you just use some imagination you could see it scaled down, slapped on a bottle, from a near seaside brewery, bit of blerb on the back, and hey presto; you have an amazing looking product. It couldn't hurt to try, Uinta have and it seems to have worked brilliantly for them. 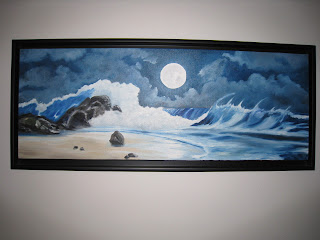 This is not my only style of work, don't think me weird: I don't want to stick seascapes on beer everywhere, but you get the concept. Get others involved in your product, it's not just what's in the bottle that counts - people need a reason to want to buy it in the first place. Unless your beer has the accolade of being so awesome that people will buy it label-less you need something to draw there attention, something to make them say, "Wow that looks nice!"
I'm not just passionate about beer, but everything that is involved in beer, from the bottle to the label to the beer itself. In this world of such great beer diversity (which is awesome) you need something a little extra special to stand out, and to get people buying. (maybe that's why we see so many breweries beer labels in Beer Ritz changing on a monthly basis)

What about the beer then, as that's what you came for? 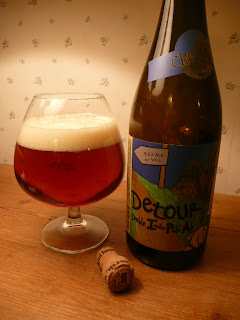 Well for a start it looks amazing. You don't really get it from that light but I don't think I've ever seen such a clear colour of  wicked amber red in my beer drinking days. And the smell: WoW! Imagine caramelized lychees and your there. Tonnes of fruitiness going on -apples/grapefruit/grapes and raisins, some rum going on in the back there too.
The flavour is bizzar, your nose says hoppy IPA but your mouth says MASSIVE HOPPY BARLEYWINE! It's so intense. Really woody, lots of piney resin abounding, and a smooth and mellow bitterness which gives you a bit of heat/warmingness. It's drying and very moorish, would be perfect with a masala, but tonight's treat will have to be a ham sandwich! (goes great with that too btw!) I fear the tasting notes I've given in the past few blogs have been a bit similar, but it's just the level of great beers I've been drinking! Lots of caramel malts in the body, and that juicy fruitiness leaves you refreshed and wanting more. Seek it out. Hunt it down. Then share it with a good friend or two.

I think beer and art should go hand in hand. It just feel like a good fit for me. If Stella can make ice sculptures to promote there beer, (see there christmas TV advert) why can't anyone else? Break the mold people, get out of your bloody comfort zones!
Posted by Ghost Drinker at 14:29