Last night saw the close of Leeds' International Beer Festival, and myself and another Leodensian Beer Blogger; Leigh have decided to team up together to share our own thoughts and sum up a few different beers we tried at the festival and our general impressions.

I began my night with an unfamiliar scene of arrival. Leeds Town Hall seemed to have been descended upon by beer lovers from all walks of life and beer experience.. all drinking the good stuff on the steps of the mighty Hall with carts and vendors of food dotted around and in between the fest-goers dishing out hearty foodstuffs. It was welcoming.

I purchased my ticket on the door and wandered in. This was my first ever visit inside the Town Hall, and all expectations were met as the building interior truly lived up to all the hype that I've heard about it.


When I got my free glass it was time to fill it with some beer! I headed straight for the American selection and got stuck in straight away with;

Beer 1: 10% IPA from Ska Brewery: Decadence.
I'd like to think I'm no stranger of the notion that is decadence, but this beer didn't really stand up to that word, or did it?? It was surely a formidable beast of a beer, but it certainly didn't drink anywhere near it's strength, and like many other festival goers, my half was gone before I realised it! It was really great though. Big citrus fruits punched above their weight whilst soothing caramelized malt and alcohol blended together to warm your throat and make you want more at the same time...

This was my only real issue with the festival... no one serving proper thirds, the amount of strong beers on display would have benefitted from this.

Beer 2: Hardknott Thank Chinook It's Friday, 4.3% Bitter.
As I crossed the Hall I was confronted by two familiar friendly faces from Hardknott. After a quick peruse of their wares I decided to go for the Chinook Bitter from keg rather than the cask version that was on offer as well. Whilst being decidedly colder than the cask, it was still a very pleasant bitter. Fruity bitter tones made for a refreshing and easy drinking beer from Hardknott, and the conversation of when will we see some more low abv beers like this in the bottle from the guys ensued (light heartedly of course..)

Beer 3: Ilkley VPA, 3.3% Victorian Pale Ale.
Crossing the Hall once more I "bumped" into Melissa Cole by the Ilkley stand and managed to get her to sign my book of hers, which I just 'managed to have on my person' at the time... Magic Rock Stu then rocked up for a chat and after I declared the opinion that I thought Ilkley were the best brewery in Britain at the moment we all decided to try some of their beer. 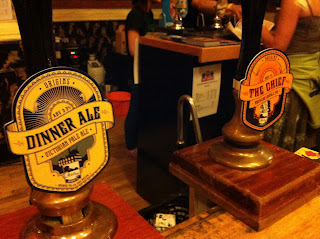 The VPA Dinner Ale is another one of their Origin series, and like the others in the series, is one I hope that will see a regular place in the Ilkley roster. Combining hops from Kent, Australia and New Zealand this beer is an incredibly flavorsome, but light and easy going beer. It's the NZ hops that really shine through here though, releasing their classic juicy fruit flavours into a beer of only 3.3% which you tell yourself; "I really could drink this all day!"

The picture also shows off beer 4 of the night which was next: The Chief, 7% Double IPA.
I've tried The Chief once before and was confused by it originally. The first time I tried it I had the version made with a Belgian yeast and whilst it wasn't what I was expecting, (from a American style DIPA anyway..) it was still a very good beer. On the night however, this version of The Chief was much more to my preference. The Belgian influence had been ditched and more of that 'America meets Yorkshire for a Double IPA showdown' was able to shine through... and shine it did.

For my last beer of the night I moved to the stand next door which just happened to be manned by Thornbridge. 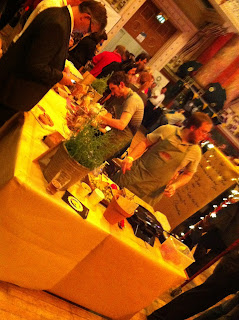 Beer 5: Chiron, 5% American Pale Ale.
This was something that went great with the odd bit of ham from the Friends of Ham stall in the centre of the room. Meat being carved, good friends all around and a refreshing, spicy but citrusy pale ale was a great way to finish the night, and the perfect palate refresher/cleanser after many different beers.

I had a really good time, and while some people had a little moan about the layout and organisation, I would back up the guys here saying it's their first fest and I think they did really well. Being an International Beer fest it could have probably done with more International beer, but there was enough great beer for me to make it a great night. Thanks to all who made it possible, and here's to next year!


Like I said though, I've been working with another Leeds Beer Blogger this weekend to try get as much coverage of the fest as possible. So, for another perspective, and another few beers from the festival, I'll invite you now to head over to Leigh's blog; The Good Stuff for 'Leeds International Beer Festival Part 2' and Leigh's impressions of his night.
Posted by Ghost Drinker at 05:59