It's been a very fun couple of days. With the Trade Day at GBBF on Tuesday and selling IPAs all day at Beer Ritz for IPA Day today, it's been a very beer geek friendly week indeed! Unfortunately I could not get down to Mr Foleys tonight for the IPA Day festivities as some last minute plan changes really scuppered my abilities to go out tonight - massive sad face. So I thought after I had taken care of some unwanted tasks, I thought I should really drink some big IPA to celebrate today at least. The IPA in question was one I bought from GBBF not two days ago. 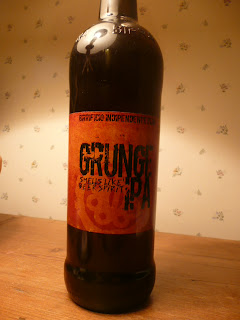 It's IPA. It's Italian. It's called Grunge. Sounds good on paper.

It's from Birrificio Indipendente Elav, apparently, and it's a 6.3% stunner in a very impressive looking bottle.

The beer is very dark - dark amber brown - almost a black IPA. It has an impressive aroma (apparently it smells like beer spirit!) of bone dry straw, and a lot of rich fruit character. I'm thinking gin soaked raisins, or even vodka soaked raisins. It's certainly not your average IPA. But that's what I love about it - I know nothing about this beer, RateBeer couldn't even find it for me, and as I don't speak Italian, I'm only going off my own senses. (which is quite refreshing for once!)

Flavours are rich warming and intense. Loads of strong orange pith. Tonnes of boozy juiciness. A big malt backbone of biscuity flavour lurking about too. A really long lasting soft bitterness rounds off this beer into something that's quite special. It's only a shame that I have the one really.

It seems IPADay has gone off a massive hit around the globe. The number one reason this pleases me the most:... because it gives scope for an Imperial Stout day in the future! :D 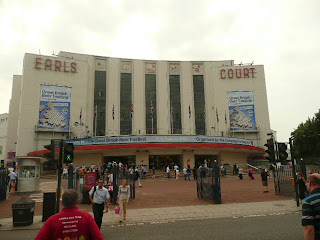 Like I said before, I grabbed this beauty from the Trade Day at GBBF on Tuesday. This was my third (and probably final now it's moving) visit to Earls Court for the T.D. festivities.

I'm not sure the beer selection was as good as last year, but this year was made extra special to me for one reason only: The People! I've only been blogging and tweeting for under a year now, and in that short space of time I've managed to gain contacts and friends all over the beer geek world, and on Tuesday I finally got to shake hands with a great deal of them. I didn't think I'd manage to put them all down here, but hell, I'm going to give it a go! It was a pleasure to meet bloggers, tweeters, brewers and people I know already (for a drink) a plenty: 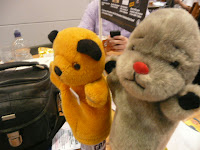 A couple of people I saw but didn't get a chance to speak too: Melissa Cole, The Ilkley Crew, Doug Odell and the brewer from De Molen. It would have been nice to share some beer with you guys.

If I missed anyone out, I'm sorry, but it's a big list!

It was a fantastic day, just as I'm sure IPADay was for many people today. The GBBF will always be an epic few days, no matter what anyone says about it.... although I have no idea about this beer.... 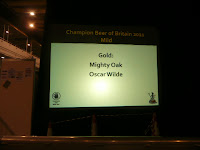 Much progress Is under way in the beer world these days. One can only hope that it keeps up, because as we all know.... beer is great! Long may it prosper!

So, a massive cheers then! Not only to GBBF, but also to IPADay. Drink up Beer lovers :D
Posted by Ghost Drinker at 15:15