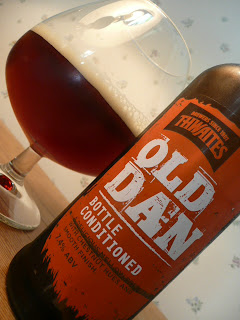 I've not had many Thwaites beers in my time, don't get me wrong I've had my fair share, but none were as good as this.

I managed to spot this lurking next to the Thornbridge beers in Waitrose last week, and for a 7.4% bottle conditioned ale, I took my fair share for £1.48 per bottle!!

Up to the light it has a beautiful amber/mahogany hue, with only a slight chalky-big bubble appearance. It has a massive old English ale aroma, hints of chestnut, orange rind packed marmalade, a little spice, some burnt brown sugar and a dose of rum soaked raisins from the alcohol punch. It's your Gran's fruit cake in a glass!

To taste: It's very soft with a light, smooth carbonation. Very sweet and boozy with a full on dried fruit body. Lots of caramel and toffee sweetness coming from a fine selection of malts (Maris Otter, Pearl and Crystal - English malts used) and a little woody hint creeping in the finish with a touch of bitterness coming from the hops. (All English again: Fuggles and WGVs)

I'm not sure how new this beer is, after all Thwaites have been brewing since 1807! I'm sure the beer Isn't that old but if they continue to churn out beers like this, I'll continue to buy them. I really enjoyed this beer, and as the bottle suggests, I may even lay some down to age and allow the beer to "mellow over time, with increased fruitiness" So Cheers! to Thwaites, and to Waitrose for bringing us (me) the bargain beer of the year! (so far...)

I wonder what other awesome beer bargains I'll find later whilst shopping for my bread and milk....
Posted by Ghost Drinker at 08:25