So it was with great haste and gusto that myself and Jeff rushed down to Mr Foleys last night after finishing up at the shop. We had heard from reliable sources that there was a very special beer on, and that we'd be foolish to miss it. The beer in question turned out to be, probably, the best beer I've ever been served in Mr Foleys!

Welcome to the world of the Beer Camp! 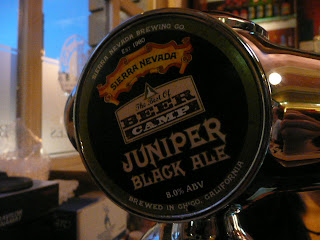 How Dean managed to source a keg of this stuff I'll never know.... (only about 10 kegs even made it to the country so I've been told!)

If you've not heard of Sierra Nevada's Beer Camps before, it's basically where a few lucky people get invited to the brewery to design and make a beer with all the Sierra team.

This 8% Juniper Black Ale is the REAL DEAL!!! It has a massive aroma of chocolate, biscuit malts, blueberries, oats and a little coffee. The flavour is instant and huge. It's rich, really roasted, which leads on to a nice bitter chocolate/burnt malts flavour. It's also got a high hoppy fruity bitterness too, some lemon and orange pith. There's even a bit of melon skin creeping in. There's a hint of wood hiding in the background, and this beer certainly does not drink like a 8% beer at all! It really seemed like this beer was an Imperial Stout mixed with kegged Black IPA - it was extremely delicious.

I would recommend you get down to try some of this before it runs out, I wouldn't think it will last long. And I suppose I've saved the best news for last too.... After this keg runs out, these two will be taking its place! 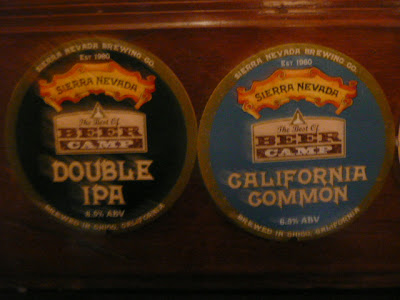 p.s. Mr Foleys also has keg and cask versions of Summer Wines 7cs on at the moment; something that's really interesting to try a comparison of.

I managed to get down for the 'launch' of the double IPA, but didn't manage to take any tasting notes. Here's what Neil thought from Eating isn't Cheating.
Posted by Ghost Drinker at 09:55