Yesterday I took a wee trip to another of my favorite Leeds bars, and will now try to portray the establishment in a good light. (un-biased as always!)

Volume 2 of Ghosties favorite Leeds bars is subject to the one and only; Mr Foley's Cask Ale House! Yes this is place to be if you need to get your real ale fix on after being behind a desk all day. 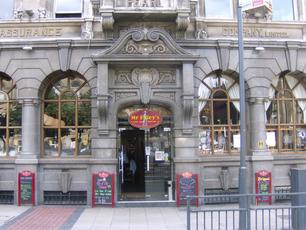 To start with, the interior; Foley's boasts a large interior cladded with beer memorabilia and alcohol POS items. Seating is very comforting, one can either choose to stand up the bar, racked up with cushioned stools, or find space elsewhere and get swallowed up by the large sofas - a good way to get people to stay in your pub.
It's a light and spacious pub/bar, a kind of restaurant meets real ale house meets sports bar. No time in the day does Sky Sports not shout the scores of some sort of sport from large flat screens. Not much of a bother to me, I like sports and it beats listening to mindless drum and bass while you drink real ale!
Foley's is also know by some as an award winning pub. The ale house was awarded CAMRA's pub of the year for 2008-2009 by the Leeds branch of CAMRA - not a small award, and coveted by many! 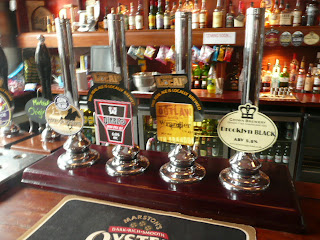 The bar displays a great shiny selection of 20 different beer nozzles and 1 cider nozzle to choose from. You can always find a supreme selection of 10 cask ales and 10 keg lines for international beers. Having big ties with york brewery however, will mean that 4 of the cask lines will be permanent York beers such as Terrier, Guzzler or Centurions Ghost. Not a York fan? not to worry as the other 6 pumps will have a constant rotation of different ales, from around 12 great local breweries. A few that were on today were Brooklyn Black from Crown Brewery,  Diablo from Summer Wine, and beers from Roosters and Kelham Island. 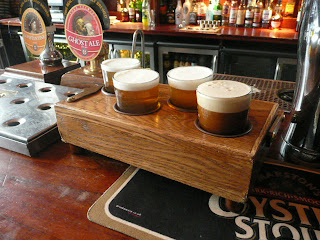 Still don't really know what you want? well you could always do what I did; Yes, Foley's has a great tasting box deal on all there cask ales. The deal goes - four 3rd pint measures of any cask beer for only £3.60! - a really good, nice idea I think, and a good price too. Trying 4 different ales in quick succession like this definitely got me in the mood to buy more beer.  The next selection for me would come from a new addition to the taps for Foley's - not sure it needs much explaining though. And no it wasn't San Miguel or Leffe blond, but some Zeitgeist and some Punk from Brewdog. 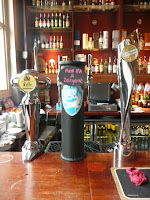 If you fancy a bottle of something, there well stocked up with favorites coming from; Belgium, such as Orval and Abbaye des Rocs. The USA, such as Brooklyn, Goose Island and Anchor. And Germany, such as Schneider and Weihenstephaner. Guest bottles will usually be available, at the moment there still getting through a backlog of Christmas beers. (they still have some Anchor x-mas 2010!)
If your partial to a wee dram though like myself, then you wouldn't be disappointed by the vast selection of single malts they have. A few more 'out of the ordinary' whiskies include; Bowmore 18yr old, Auchentoshan, Jura, Balvenie and Glenmorangie Quinta Ruban. - once again something for all tastes. 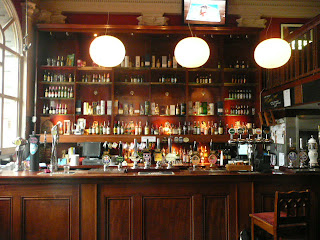 If your looking for something to eat, look no further, as this place has a great selection of light bites. If your looking for a light lunch then grab one of the deli boards, or choose from a wide range of sandwiches. If your looking for something a little more, then the legendary Foley's Burger is a treat to slake the biggest of hungers. The menu is also home to a great looking selection of meals which you would expect to find in your cosy-est country pub.
Now writing about places such as this are rather easy as everything is so damn good, but I look out for the little things in places which make them that little bit more 'extra special'. Being a big beery nerd as I am it's not hard to see why I like this place so much..... 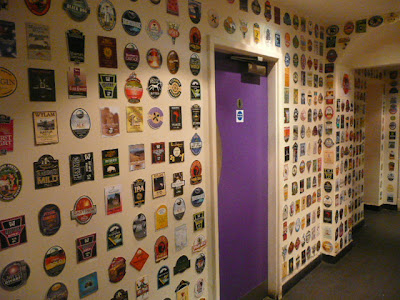