Thornbridge And A Tale Of Smaller Beers 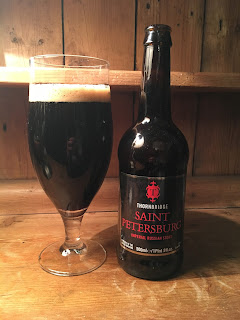 I'm currently drinking this very old bottle of Thornbridge Saint Petersburg Imperial Stout. The older recipe bottle at 7.7%, before it got reduced to 7.4%.. (thanks government!) It went "out of date" in 2010 so I'm going to guess it's maybe 7/8yrs old now..

It's aged amazingly in my opinion! A perfect amount of carbonation still left leaves a great tan foam which lasts and leaves delicate legs as I consume. The large yeast sediment is left stuck to the bottom of the bottle as it should be and the flavour is just phenomenal. Dark chocolates and black forest gateau fruits are dominant in this smooth and rich beer. Drinking far much easier, than what is probably a stronger than 7.7% beer, it's a proper winter warmer. All hail Catherine II!!

The whole experience leaves me saddened though. I know I'll never have this beer, like this, again.

Thornbridge don't leave as much sediment in the bottle like they used to anymore. They also have reduced the strength of this beer, which in all honesty I can't blame them for..  The thing that really gets to me for some reason though is that Thornbridge have moved from 50cl bottles to 33cl bottles.

Bigger bottles are just better, end of. You try a big bottle of Chimay Blue next to a small bottle of Chimay Blue and tell me they're the same.. They're not. And the difference only gets more obvious as they age. Putting all your beer in 33cl bottles just seems like following the current trend of all UK brewers, which I think should be avoided! People don't want less beer. No one wants a 33cl bottle of Kolsch!! Sure, maybe for your big, special beers, but the whole range? It was the same for Buxton a few years ago, I would get so many complaints in the past that Axe Edge was now in 33cls instead of 50cls..

We're English, not American, we want a bottle of beer that's going to fill our glass without us having to go back to the fridge twice as much!

Let that sentence sink in just a little..

But I'm rambling though, none of this is going to change anything. I'll sit here and throughly enjoy my last bottle. It's been an absolute treat, and one to be remembered! One last thought however; Should monetary gain and beer industry trendsetting define you and the product you bring to market?

I'll follow my Buxton method with Thornbridge now, and pour two bottles of Jaipur into one glass. Not because I have some sort of problem, but because 33cls is fuck all beer!
Posted by Ghost Drinker at 12:39