The last few months have been a bit of a whirlwind, but it actually feels really good to get behind this keyboard (for the evening at least) to tell the truth!

I don't think there's anyone out there at the moment who would disagree that Northern Monk Brew Co has had a bit of an explosion in the last couple of years. Their improved product quality has certainly not gone unnoticed to us!

So time to put them to a classic Ghosty test! Can you make a good Imperial Black N Tan out of their beer?!

Speaking of cans though, Double Heathen and Black Forest Strannik are a force to be reckoned with on their own, let alone blended together! A 10% DIPA meets a 10% Russian Imperial Stout. Good combo! 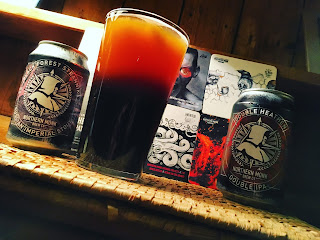 Now this is the second time I've done this in two days, and for a good reason. The first day I just blended them straight together to make one beer. Tonight I've layered them to create a whole different drinking experience. The first night was great, but this night has been really cool..

When you layer a latte most people will just mix them straight together, which is fine, but tonight I didn't mix the two beers together.. I just drank them layered. This meant that for the start I was just getting great DIPA. Around the middle however, you can't really tell where the DIPA ends and the Impy Stout begins, so you get a fantastic blend of the two without even knowing it. By the end of the glass I knew I was drinking Imperial Stout sure, but that middle part.. I really need to do that again!

I want to see a Black N Tan like this as a regular occurrence in the Northern Monk Refectory!
Posted by Ghost Drinker at 14:31