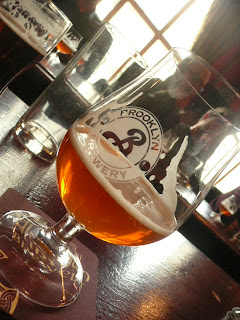 I've never had the chance to meet Garrett Oliver before. I say chance because it's not the first time he's come to Leeds to share some of his wares. So when I got an email from Ben at James Clays asking me if I wanted to come down for a lunch with him and try some of his own personal beers with a small group of West Yorkshire bloggers - to say I was exited would be putting it extremely mildly!

The lunch was to be put on by Mr Foley's Ale House, and the ever impressive chef - Tyler Kiley, who had the daunting task of preparing a 3 course meal menu to go with Garrett's beers... a menu which he slaved over for the best part of 3 days.

For starters we indulged in some spicy chicken wings which were absolutely coated in a deliciously fruity but hot sauce, which I think I remember Tyler telling us he wanted to see our fingers and faces covered in by the end of it. It was to be paired with Brooklyn BLAST - an 8.2% IPA - a really nice beer to start with; fruity, balanced and poured from bottle conditioned "ghost bottles" (loved that part). I think I remember they were called ghost bottles because the beers served were from the breweries private stash, and most of the beers we had don't normally go into the bottle. 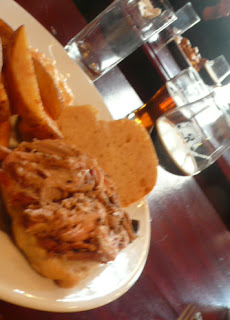 The main course was a fantastic pulled pork sandwich (14 hours slow cooked!) with classic thick cut wedges, and homemade sauces of mustard of barbecue sauce. This was paired with 6.9% Mary's Maple Porter. The beer had a nice earthy, woody, slightly roasted grain quality, but also had a subtle sweetness from the shed loads of Maple Syrup used in the production of this Porter. This was the pairing of the meal for me, I thought the beer and the food balanced each other perfectly.

By this time there was quite a bit of a buzz around the room as we all became a little more relaxed and as the beer flowed. This was all to come to a abrupt silence though, as the desert course was served. Brooklyn Black Chocolate Stout and Vanilla Ice cream floats was the order of the day. At this point you can forget everything you think you know about beer. I took an inhale and I was lost for words, all I could produce was a laugh as if to say 'that's one of the best things I think I've ever smelt!' Leigh gave it a bit of a better write up than I managed. 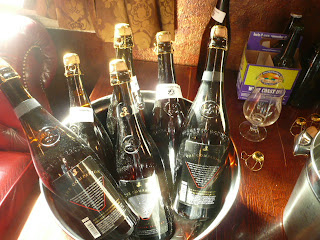 That was the food portion of our time together. We moved onto some after dinner drinks next. First up was The Companion. The Companion is a beer brewed in line with the launch of the Oxford Companion to Beer, and just as the book was produced by a collaboration of writers, the beer was made by a collaboration of people, who also had a hand in producing the book too. TC is a 9% Wheat Wine (sort of the brother of a Barley Wine)  and is made of 55% wheat and 45% barley (all floor malted) and then given a Champagne yeast to give it an extra bit of sparkle. I thought it had a slight earthy, sherbet, fruity flavour and it reminded me of Deus ever so slightly. Garrett told us that using wheat made for a much lighter body to the beer, and he wasn't wrong, it was great!

The last beer on offer was the hit of the event. Cuvee De La Couchet Rouge Rose was a 10% beast which you couldn't really put into one particular style category. Essentially it was Brooklyn Local 1. aged for about 9 months in bourbon barrels with the addition of Pinot Noir and Chardonnay lees added to the barrel from the Red Hook Winery. The result appeared to be some sort of Gueuze style beer from initial aromas. The flavours aren't as powerful as a Gueuze though, but are still just as complex. Stone fruit dryness, with a slight hint of Brett and a slight acidity, it was truly a fascinating beer and one that got even better when some of the yeasty dregs of the bottle were added. 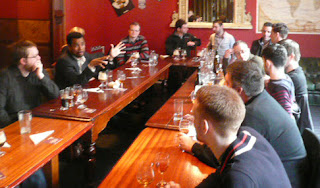 After all that we all kind of felt a bit of a subdued contentment, and could have all probably gone for a long snooze. Garrett is a truly inspiring man, when he talks everybody listens. He spoke to us so fluently and so passionately about the thing he loves the most - his beer, his craft and beer in general. We heard tales of his connections to Yorkshire, we heard tales about Roosters and Daleside and many other breweries he's done collaborative brews with. He spoke of many things and we all sat, listened and soaked up all he had to say. It's very hard not to be infected by his enthusiasm, it's something that I found incredibly refreshing to see as well, seen as he's been in the game for quite a while. He's a very genuine character, and it doesn't matter who you are, he has time to listen to what you have to ask or say and he'll throughly engage you in conversation. It was an honor and a privilege to meet him and to come on this great day out, and what a day it was! 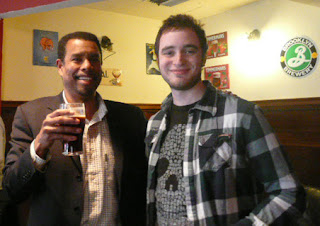 The festivities didn't just end at Mr Foleys though. We got the blogger troop together, and after a few cheeky halves in Veritas and the Vic, we made our way up to North Bar. This was where Garrett and the head brewer from Nogne O would be hosting a bit of a Meet the Brewer Q+A. More people turned up for this and we all had a fantastic time. It was really nice to get to have a good chat with Eric Ottaway who's the General Manager of Brooklyn Brewery, particularly about the business side of things and what the future might hold for them and craft beer in general.

I think I've rattled on for long enough now, but I will say that not even the following morning's hangover could take my smile away.

I will give a shout out to all the Blogging Massive who came along, it was really cool to see everyone again. Nick and David have already written on the same subject, and I'm sure they won't be the last. I give my many thanks to Dean, Ben and the James Clay team for inviting me along and setting the whole thing up, and props go out to Tyler for the fantastic meal. My final thanks go to Garrett and Eric for providing such an epic day, and one which I'll remember for quite some time.
Posted by Ghost Drinker at 14:20