This weekend, they came from far and wide... (but mostly from around Leeds). They came with beers, cameras and note books. This weekend the beer geeks assembled on mass with only one thing on their minds: This weekend was the European Beer Bloggers Conference at the Met hotel in Leeds.

This will be a sort of photo-journal of my experience of the weekend. I'm sure everyone else has their own experiences and those will come out I'm sure in their posts, but this is mine.

The weekend really started off in North Bar for me, with the launch of draught Tipopils from Birrificio Italiano. (great pilsner, but I really don't understand all the hype behind it) It was on the back of the 'Introduction to Leeds pub crawl' organised by Leigh Good Stuff - which, may I add, was expertly organised considering how many people showed up. 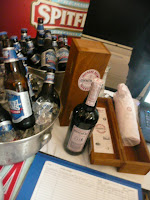 When I arrived at the hotel the next morning, I was confronted with a room full of beer geeks and beers. My first beer of the conference had to be the 9% Generation Ale from Shepherd Neame - hey, start as you mean to go on right? 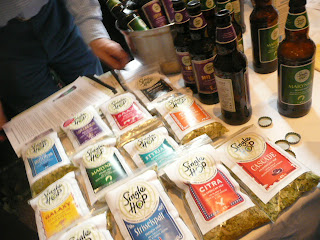 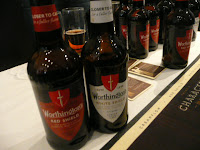 The room was packed out with brewers, promoters and their wares for all us to try. I think the most impressive stand had to be from William's Brewery - with the Double Joker being a big hit!

After we were quite lubricated, we moved next door into the main conference hall where we had our first couple of talks. The first talk was a look into beer blogging in Europe - the idea was to let everyone know that the conference wasn't just people from the UK visiting.

The second talk was from Adrian Tierney-Jones and Simon Jenkins about improving your beer writing. I was looking forward to this one, but there was no real mention of bad spelling or grammar, so I think I'm safe... ATJ talked about having short sharp blasts for your posts, but this is probably my longest post ever, oh well.. What I really took from this was; Write about what you want to, and what makes you happy.

The next talk was on blogging platforms and website design. This all went a little over my head, as I'm not a tech minded sort of guy (hell, I can barely use this) and when the term 'domain name' is something that's easy enough to confuse me, I'm not really going to take in much. 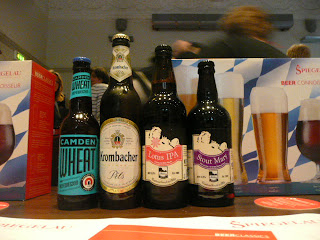 Next up back in the first room was the comparative beer and glass tasting hosted by Spiegelau. We kind of felt a bit like naughty school kids at the back of the class in this set up - that's what happens when you sit next to Matt Gorecki and Phil Hardy...

It was an interesting experience, but I couldn't really take anything from it. I know that different glasses can have different effects on aromas, but when we were using such small amounts in such large, tall glasses, I didn't really see much of a difference.

By the end of that, all I'd eaten for the day was a few cubes of cheese, so was very ready for some food. 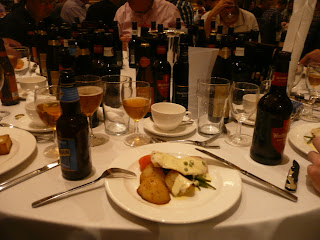 The meal was put on by Sharps and Molson Coors. All the Sharps beers were great and the main course of Hake was delicious. I wasn't too sure about the salad with fruit for starters though. 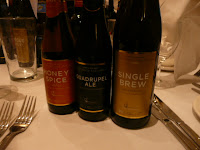 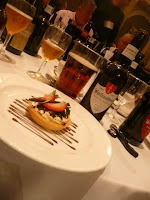 All throughout the meal there was a slide show presentation on the big screen. What people who weren't at the conference didn't realise was that every tweet that had the hashtag #EBBC12 after it came up on that big screen. Our table got a little bit preoccupied with making sure things got up there, which to NickiQuote's downfall, was rather amusing. You'll have to ask him of the things said though...

After the meal we broke straight into the night of International Beers. 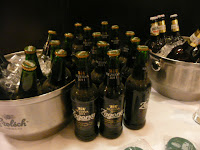 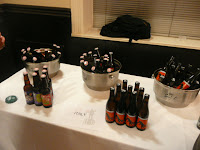 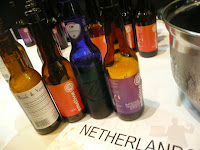 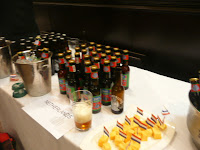 I'd never really gotten palate fatigue before, but after a while everything started tasting a bit same-y, so I decided to tuck and run at about half eleven and save myself for the next day.

The next talk was about social media and what it can do for your writing. Again, thinking all new technology is witchcraft, this was a bit lost on me. I did however think the pinterest idea was a good one. (although I thought it was 'Pint-erest'...)

Following this was the state of the Hops Industry by Paul Corbett which, while being quite technical, was really interesting to see where all the different hops come from, new verities coming out and how the hop world is changing. 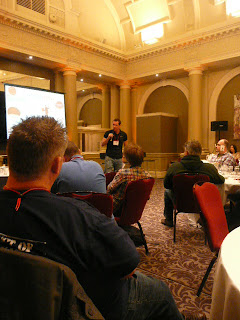 The key note speech was up next from Stuart Howe from Sharps. I won't go into much detail here, but it was very obvious to me that he's clearly a passionate and enthusiastic man about beer and brewing for sure.

We then broke into one, sort of, massive focus group in the room and had a few very good discussions over some beer related matters, over some beers, which was really enjoyable. Then we were treated to 10 different beers in 50 minutes for the Live Beer Blogging event. It was a sort of speed dating but for brewers. Each brewery had 5mins to show and explain their wares whilst we drank and asked them questions. After a beer explosion all my notes were ruined, furthering my thought that maybe I should get a ipad, but I think Nick put down what happened pretty well here.

We then moved onto the Pilsner Urquell meal at Anthony's in the Corn Exchange, something that most, sorry, all of us were looking forward to. 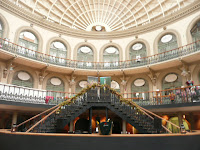 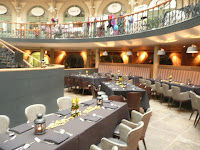 We had a nice talk from the guys about Pilsner Urquell, and the story about the first barrel of the stuff ever made was probably the most captivating story about beer I've ever heard in my life - that man knew how to tell a tale! We also got to try out our pouring skills.

We all took our places and sat down for a utterly fantastic meal accompanied by regular and wooden barrel served unfiltered Pilsner Urquell. It was literally quite amazing. 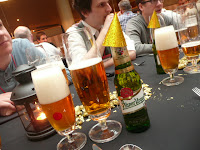 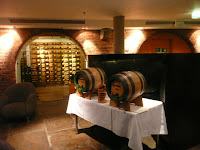 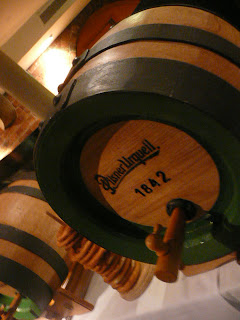 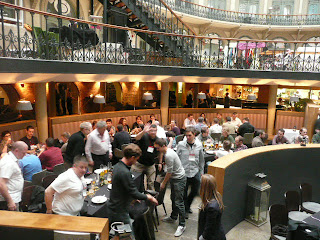 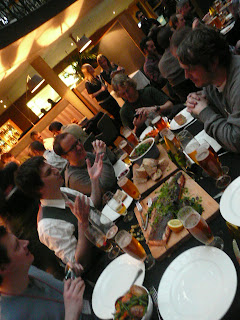 After that I couldn't really move anymore, and when I discovered that a couple of the beers in my bag had been smashed to bits, I conceded defeat and decided it best not to move onto the after party and pub crawl of Leeds and sneak off into the darkness. 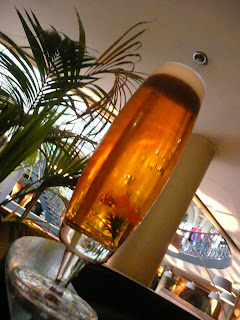 This has been an amazing weekend.

Made possible in no small part to the sponsors and organisers of the event. I'd like to give a big shout of to; Allan Wright and Elle Potter for their organisation skills. I'd like to thank all the sponsors, much love goes to; Molson Coors, Magic Rock, Brains, Shepherd Neame, Spiegelau, Badger Ales, Williams Bros. Brew Co., Marston's, SIBA and all the brewers that came along to share their wares.

It has been fantastic to finally meet the rest of the beer blogging world. You're all amazing guys and I love and respect you all. I learnt a lot this weekend. I laughed, I drank, I ate, I needed a little sleep and we partied!

I hope my hometown of Leeds did you guys justice. I know I won't forget it for a long time, and can't wait till I can drink with all you guys again.